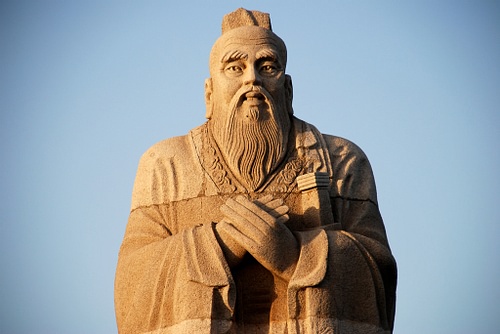 The Principles of Confucianism

Long before China was the monolith of today, it was a fractured land of warring states. Five hundred years before the birth of Christ, the Zhou dynasty who held the northern parts of the Chinese plain began to lose their grip on power. As new nations arose, and large states crumbled, a period of great intellectual curiosity and intellectual expansion occurred. It became known as the Hundred Schools of Thought. The most prominent schools are still taught today, and the most famous of all is Confucianism.

Into the broken world of early China, Confucius was born into poverty, as his father had died soon after he was born. Bookish, as a child, he lacked the social class to pursue his talents. Instead, working as a keeper of granaries and livestock and bookkeeper. He excelled in each position, leading onto the next. Up and up he rose, eventually becoming the minister of works and then minister of crime.

However, his increasingly prominent positions meant he now rubbed shoulders with the aristocratic families. They held sway over his native province of Lu. He objected to their routine ritual indiscretions. For these families sought to wrestle the power of Lu from who Confucius perceived as the rightful ruler.

After attempting to sabotage the families’ plans, he was exiled. For fourteen years, he wandered the land, seeking a ruler of virtue, who would accept his insights. But he searched in vain, finding only petty men with petty feuds.

In their stead, Confucius began to devise his principles of a good life and good rule. He believed that through moral strength and fortitude, a few could help the many. But first, like steel, they must be tempered by politics and life before being set on a path to power.

He developed six fundamental principles, from which his entire philosophy unfolds. The most important of which are the first two: Jen and Li.

Jen, meaning humanity, defined mankind. It separated us from the animals. It was a sense of dignity and respect, not just to oneself, but to all living things and human beings. From Jen, all else followed. Confucius often lamented that he never saw Jen expressed. But it was said that a man of Jen, would sooner sacrifice himself to preserve its sanctity.

Li is the principle of gain. It is the guiding hand of human interaction. Li requires you to ask, how should things be done? What is needed for a well-ordered society? From your conclusions, you are then presented with the correct way to act. Li also lays out the Doctrine of the Mean, which states that proper action is found between the extremes, and establishes the Five Relationships, and their associated virtues. For instance, father and son (loving/reverential), and ruler and subject (benevolent/loyal).

Next is Yi, or righteousness. It is the moral obligation to do good. Yi flows directly from Jen, a sense of humanity, and Li, an understanding of societal gain. Under these principles, you must recognize what is right and wrong and act accordingly.

Under Hsiao, you are required to show reverence to your parents and bring your family honor. Confucius believed that, because your family sacrificed their lives for you, you should give them respect. Furthermore, only through Hsiao could one find Jen.

The final principle of Confucianism. Te concerns itself with the power of government. If a government can maintain economic sufficiency, military power, and the trust of its people, then it is good.

Following the death of Confucius, the Zhou dynasty fell into utter ruin. The Hundred Schools of Thought each competed for followers. But it was the Confucians under Mencius who would model themselves the teachers of kings. In time, a tough stance on law, order and authority came to define Confucianism, though the underlying principles remained. As the world fell apart, it was Confucianism that stitched it back together. Even today, throughout East Asia, the values and teachings of Confucius are still taught and venerated.