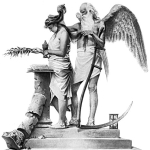 I’ve long been fascinated by this picture, statue, or representation of “Death and the Maiden” as it relates to Freemasonry. I first saw the picture when I became a Freemason, in one of the many books that I was able to pour through. Masonic art in general has fascinated me because it is, generally, not only beautiful but also weird; it was weird in a way that made you ask “why does that bird sit on the oddly-shaped stone” or “why is that man holding the woman’s hair while carrying a scythe?” It spoke to me, begging me to figure out what it was trying to tell me. Still, today, I can sit for hours and look at paintings, engravings, and statues and wonder what their creators meant to impart.

Death and the Maiden isn’t a new concept. Artists as far back as Duerer, Baldung, and Beham in the Middle Ages were showing that “all human beauty is ended in death (Beham.)” Shubert and Dorothea Tanning created at least two pieces of their art around the concept of Death and The Maiden. Yet, the pictures attributed to the Freemason’s ideas of Death and the Maiden seem to be very specific and rich in symbolism.

The Freemason’s “Death and the Maiden” seems to be attributed to a 19th Century Freemason named Jeremy Cross. A student of Webb and follower of Preston, he taught and lectured on Freemasonry extensively at the beginning of the 19th Century. General knowledge about him seems to be all we can find, according to Phoenix Masonry scholars and articles, but it seems the idea of the entire composition is attributed to his genius.

The composition has been recreated by others, but the basic design is as you see it above. Some have the maiden holding specific tools with an evergreen and others have her holding a piece of Acacia and an urn. The latter is a modern invention as cremation is a relatively modern invention. However, for my purposes for this post, we will still talk about it. It’s important to reflect on how symbols may change but meaning remains the 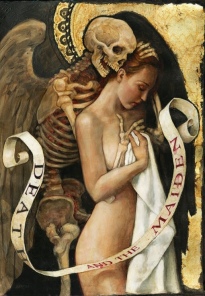 same – and in this case, the emphasis is to see death on one hand, and everlasting life on the other.

Ostensibly, the winged figure behind the Maiden is Death. Shown as an old man, long-bearded, with wings and a scythe, he seems to be, as one author put it, removing the tangles from her hair. When one looks at this picture, it appears that he is about to cut her hair; taking a purely Judaeo-Christian point of view, from the inventor, the inference is that this is about the moment before death, before life is cut short. Tearing of hair and cutting hair were signs of grief and distress to the Israelites, and even implied the whole destruction of a people. Women’s hair was grown long to distinguish them from men but hair overall was a sign of health, virility, and life. That Death’s scythe is not raised implies that death of the physical world is not imminent but it is on the horizon. Death prepares the youth for what may come at any time, as implied by the hourglass sitting beside the figures. As one is born and grows, Death is always behind them, preparing.

The broken column seems to be the main figure of the composition, and implies that it is a symbol of the Freemason who is viewing the piece. Why not “every man?” Because columns are, symbolically, the individual Freemason. Freemasons are columns to uphold that “temple not made with hands.” Freemasons are there to hold up the ideals for others to emulate and must be strong and sturdy enough to do so. As we age, we start to crumble, become weak, and eventually our “bent backs” signify the end of our contributions to Humanity. Again, the broken column sitting beside its foundation shows that while Death is not ready to strike, we must prepare for it by the time our moment draws near. Hence, what appears to be a book of sacred knowledge, of whatever kind speaks to us, sits beneath the Maiden’s hands. She is studying intently, in quiet contemplation and thoughtfulness. She is not distraught or upset. Both figures are somber and still and accepting.

Then what is the Maiden? The Maiden seems to represent the essence of Life, the Will, Wisdom, and Beauty that we all can tap into to do whatever work calls us. This work is not fixing plumbing or diagnosing code or mopping floors; this work is the Work that is remembered when our time is done, in the Service of Humanity. Someone may remember that we always cleaned up the dishes or swept floors, and in that memory they see the love and dedication we had to a principle. That principle might be as material as “cleanliness” or it might be more virtuous, such as loyalty or dedication, sacrifice and service. The floor will get dirty again but the memory of the work we put into keeping it clean is what we bring to the world. The memory of Service to Humanity. The Maiden represents the potential we all bring with us at birth.

The most interesting of the symbols is the acacia plant. There are many, many theories regarding the use of Acacia as regards Freemasonry. I choose to take a more practical approach, beyond the poor or convoluted translations of the word and speculation as to 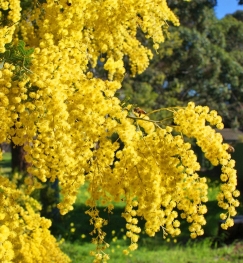 its use as a sacred symbol to the mystery school of Freemasonry. It is, generally, a low shrub or tree that grows in all parts of the world but appears to have originated in Africa and the Middle East. It is evergreen with watering, and is still cultivated mainly in the Middle East, Africa, and Australia for its gum. Besides being an evergreen plant and symbolizing ever lasting life, its qualities as a gum make it far more interesting in relation to Freemasonry.

Since ancient times, the gum or sap of the tree has been used as a fixative. Powdered, the sap is a powerful glue that can be ingested by humans. It is used to combine, fix together, and generally adhere human consumables; this includes things like beverages, soaps, and icings and sweets. It is also used to combine and emulsify paints, slips for ceramics, printing inks, and photography. Thus, it is used to bring together individual components into a sooth solution, able to create works of art as well as feed the human body. Weird as that may be, these attributes show it is directly related to our Work as Freemasons – to bring together, to combine into a well-oiled “machine” to nourish the body, mind, and emotions of the Human Being.

Lastly, there is the myth of Osiris’ death at the hands of his brother, Typhon, and his body being placed into a coffin, and the coffin being thrown into a river. Presumably, Osiris dies and the coffin is captured by low hanging Acacia plants by the river. Over time, the Acacia tree is cut down to create a column for a new temple, and in the cutting of the column, the body of Osiris is found by Isis and she uses her wings to breathe new life into her fallen husband. Many myths of Osiris’ death and resurrection are found, in parts or in whole, throughout literature and this is only one of those (Plutarch). What I find this particular myth explaining to me is that the physical form can be had once again, if the aspirant is understanding the nature of everlasting life and perhaps of the lessons that nature and Freemasonry have to teach us. In this, the column and the acacia seem to go hand in hand.

Thus, in one hand we have the energy of our lives holding onto the evergreen which brings us all together, and the ultimate symbol of our physical passing – the urn. In ancient cultures where the belief in the physical body’s transference to the Underworld was prevalent burning of bodies was not performed, namely China and Egypt. In general, however, bodies were burned using many methods, and the remains were sometimes kept in a funerary urn. Additionally, the remains of skeletons and internal body organs were also kept in urns as a sign of respect and reverence. The practice of cremation became even more prevalent in Western cultures after the creation 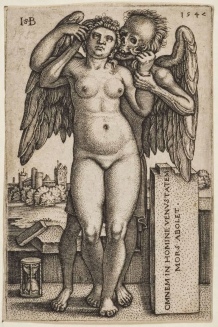 of the first cremation chamber in 1873. For some, the urn is one of those symbols that is still a little vague as regards a deeper meaning. Maybe there isn’t one. Maybe it is simply the reminder of our physical passing, and the fact that we keep the ash-filled urns of our loved ones near us is a constant reminder of the transient nature of this mortal life.

Death and the Maiden is better for its whole than its individual parts. It is a story of humans who strive for better, only to be still chained and linked to the eventual death we all face. That the Maiden is not facing her Death but still working to better the world is hope to me. It is the hope we all bear that in our work as Builders and Creators, we have left Humanity a little better for our having been part of it. We leave behind our passions, our principles, and our virtues to be passed on to further generations of humans. Our ripples effect the ocean of Mankind. While I live, I can carry on the Work of those who have passed before me, and I hope I leave a good enough legacy that others may find their burdens lighter.

For Joy Cornell, who will always remind me to be Authentic, Passionate, Joyous, Lively, and Loyal to home and hearth. Thank you for your Light. And May Light Perpetual shine upon you, my dearest brother and friend.