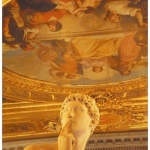 What happens in silence? Many argue that silence can invite reflection, contemplation, and discipline. In other words, silence  — along with inquiry — engages learning. It makes you wise. The significance of silence has been highlighted in practically all mystery traditions. Secrecy and silence play a big part in the masonic teaching. Pythagoras, one of the best known champions of silence, is thought to have said:

Silence is the first stone of the temple of wisdom. Listen and you will be wise; the beginning of wisdom is silence.

Silence is generally considered to mean quietness or not making any sound. And while this is indeed silence, I do not think it is everything silence is. It can also mean to preserve a secret, calm the emotions, or still the mind. There is no real silence when emotional tides are raging within us and when we find our monkey mind chattering to itself.

Is cultivating silence a way to becoming wise?

I think it would be fair to say that for many Greek philosophers, the quest for wisdom was the be all and end all of philosophy. Basically, many of us want to be wise. To know the truth. To know thyself. To know others. To know our beliefs. To know answers

However, I am not sure we all want to know silence. Why?

The practice of silence invites us to not-know. Is there room in our seeking for not-knowing? Is there space in our pursuit for un-knowing? Listening? Unlearning? For dumping how we have come to cherish our beliefs? To dismiss the knowledge that we carry in our small boxes of understanding? To be open to a magnificent, wondrous world of undiscovered realities? To hold a mystery?

Can we embrace a secret? Can we live in the question?

The Pythagoreans were huge advocates of secrecy and silence. A wonderful little book called Divine Harmony describes the Pythagorean way of life as it is thought to have existed, although we know little for sure. To become a member, an Initiate took an oath of silence for two to five years. Novices were called “listeners” and were not permitted to partake in class discussions. The ancient brothers were quite serious about silence, believing it develops powers of attention and memory.

The school curriculum consisted of developing a host of virtues in the students.

Knowledge was transmitted symbolically, through cryptic statements and riddles.

One of the symbols studied was called the “Pythagorean Y.” Manly P. Hall explains:

The famous Pythagorean Y signified the power of choice and was used in the Mysteries as emblematic of the Forking of the Ways. The central step separated into two parts, one branching to the right and the other to the left. The branch to the right was called Divine Wisdom and the one to the left Earthly Wisdom.

This symbol reminds me of the fork in the road that Robert Frost talks about in his poem,  “The Road Not Taken.” Earthly wisdom or Divine Wisdom? Each path corresponds to a different direction his life may take. He must choose carefully. Left turn or right turn? Mundane or spiritual?

I look back on my own life, wondering how many times I have faced that fork (and still do). I do not always take the road “less traveled.” Sometimes it is just easier to be busy with the mindless daily grind. Wise people are people who make the hard choices, who know things – things that matter. They put that knowledge to good use in practice. I saw a saying the other day on someone’s T shirt that said:

Knowledge is knowing that a tomato is a fruit. Wisdom is knowing not to put it in a fruit salad.

Confucius, another wise person, once said that there were three ways to learn Wisdom:

First, by reflection, which is noblest;

Second, by imitation, which is easiest; and

Third by experience, which is the bitterest.

As we can see the ancient philosophers thought a lot about the nature of wisdom and silence. But what relevance does it have for our modern times?

Silence in a Modern World

First, it seems to me that silence is a very good thing. The powers of observation can lead to truth and wisdom. Moreover, seeking truth and finding wisdom both have 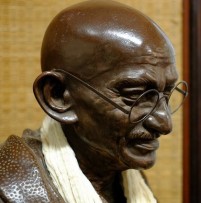 instrumental value to the modern world.

On the other hand, not all silences are created equal. Some silences don’t lead to truth. We could, I suppose, spend all our time in silence seeking to know every possible truth, but that does not seem like the path of wisdom. What we want to know are silences that matter, that lead to those truths that are relevant to our practical projects and society. Some truths are clearly more actionable than others.

I find encouragement in the exemplary lives of those who have practiced silence, people like Gandhi, the Indian civil rights leader. He is one of the wisest people I know that did great things while being dedicated to spending one day a week in silence. For him, it was a choice to continue to redeem the world and to save the world from our own selves. He knew that a person cannot be wise if he arrogantly over-estimates the power of his own beliefs and judgments. There needs to be humility: to listen and learn, and to give other voices their due.

Thomas Carlyle, philosopher and writer, speaks of a Ghandi type of silence in Sartor Resartus:

Silence is the element in which great things fashion themselves together; that at length they may emerge, full-formed and majestic, into the daylight of Life, which they are thenceforth to rule.

The great things are not “over there” somewhere. They are all right here, where we are, waiting in silence, the element of not-knowing. Vast. Majestic. Subtle. No knowing them. No rushing them. No trapping them. Only accepting the silence for what it is. And what it will become. 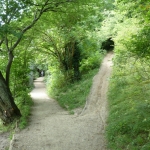 We’re back with the third part of the Trivium: Rhetoric.

Rhetoric is the art of persuasion through communications, either written or spoken. There are always two components to rhetoric – the rhetoric and the audience. Rhetoric’s aim is to make comparisons, evoke emotions, censure rivals, and convince their audience to switch a point of view. Rhetoric takes the form of speech, debate, music, story, play, movie, poem; nearly anything that can be written or spoken may be a piece of rhetoric. In fact, it may be the rhetoric that makes the art.

In the poem, The Road Not Taken, by Robert Frost, the author provides a brief insight into life’s travels:

Two roads diverged in a yellow wood,
And sorry I could not travel both
And be one traveler, long I stood
And looked down one as far as I could
To where it bent in the undergrowth;
Then took the other, as just as fair,
And having perhaps the better claim,
Because it was grassy and wanted wear;
Though as for that the passing there
Had worn them really about the same,
And both that morning equally lay
In leaves no step had trodden black.
Oh, I kept the first for another day!
Yet knowing how way leads on to way,
I doubted if I should ever come back.
I shall be telling this with a sigh
Somewhere ages and ages hence:
Two roads diverged in a wood, and I—
I took the one less traveled by,
And that has made all the difference.

The rhetorical line of this poem is: “I took the one less traveled by / And that has made all the difference.” Frost has set a scene for us of decision, or indecision, and given us a glimpse into his thoughts, which may be our thoughts at any given moment. His work is convincing us that in order to perhaps make a difference in our lives, we should tread whether others have infrequently traveled.

When we talk about skilled negotiators, people with “charisma” and “charm,” we are really talking about the art of rhetoric. We use rhetoric in our everyday lives when we create a job resume, negotiate to buy a car, when we debate politics, or even when we are convincing a teenager to clean their room. We may do it every day, but do we really understand the finer points of rhetoric? It seems to be the pinnacle of the Trivium and the highest goal we can work toward in order to communicate our ideas with one another effectively.

A nod to this blog for providing the Cornelis Cort images.