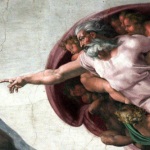 The term “Elohim” has been alternately identified as a name of God, angels, demons, or other types of supernatural beings. It has been associated with The Shining Ones, the Anunnaki, Nephilim, and the Watchers. So, what is more likely the case? And what are the implications for Humanity?

The word Elohim is usually thought of as a name for God in the Hebrew Bible, appearing over 2500 times in that text. The context in which the word is used makes that assertion less clear, however, for in some instances, Elohim appears to refer to multiple gods.

A look into the word’s origins may help determine its meaning. The word’s etymology often sheds some light on its original meaning, but in this case, Elohim’s roots are somewhat obscure. The Online Etymology Dictionary indicates the word as plural of “Eloh,” which means God. The entry also states the word is of unknown etymology and may be an augmentation of “El,” also meaning God.

Examining the word’s Hebrew spelling may also provide some indications of its root, read, from right to left, as Aleph – Lamed – Hey – Yod – Mem.

Hebrew characters, when forming a word, often tell a story as each character has its own set of meanings. In this case, the Hebrew word Elohim could be interpreted in two ways. In the first interpretation, the first character (Aleph) can be read as the existence of God’s hidden mysteries and their revelation to certain men.

Continuing on, there are those who teach men God’s mysteries, who are the same individuals (i.e., the Elohim) who goad men into what he needs to learn, encouraging man’s action forward. As those men learn God’s mysteries, His knowledge comes into those men’s hearts – spirit is breathed into him. As man becomes more spiritual, they become humbler and they become the Word over time. Through this learning, one result is that wisdom springs forth from your speech.

A second possible interpretation stems from the viewpoint of the Elohim as intermediaries or emissaries of God. The Vev represents the link the Elohim represent between God and man, heaven and earth. The Elohim also enable the spiritual to be made actual in the physical world – they are also the connection between the physical and the spiritual. From the prior, the Elohim provide opportunities for man to choose to open the door and access God directly.

Research indicates some possible associations with the second interpretation, but the connections are tenuous at best. The Sumerians (c. 4,500 to 1,900 BCE) believed in a divine race of beings named the Anunnaki. Based on imprecise translations of a small subset of some 22,000 hieroglyphic tablets, the interpretations vary from source to source. Some identify the Anunnaki as a pantheon of high-level gods while others relegate them to a much lower status having been banished to the underworld by younger and stronger gods.

From The Oxford Companion to World Mythology,the Anunnaki “are the Sumerian deities of the old primordial line; they are chthonic (in, under or beneath the earth) deities of fertility, associated eventually with the underworld, where they became judges” over the question of life and death. In some sources, the Anunnaki are a diffuse set of natural gods associated with various aspects found throughout nature while others indicate a specific number of Anunnaki with specific roles, even kings. One unique line of thought comes from Zecharia Sitchin in his 1972 book The Twelfth Planet. In that book, Sitchin proposes that the Anunnaki are of alien origin and used genetic engineering to create man.

In the Bible, is directly translated as “sons of god” and are associated with the Anunnaki in Genesis 6:4: “…after that, when the sons of God came in unto the daughters of men, and they bore children to them…”

Other potential variations include “The Shining Ones,” referenced in The Hidden Doctrine authored by Helena Blavatsky:

“…behold him lifting the veil and unfurling it from East to West. He shuts out the above, and leaves the below to be seen as the great illusion. He marks the places for the Shining Ones, and turns the upper into a shoreless sea of fire…” ( Part1, Cosmic Evolution – Stanza III)

“…these are the three-fold, the four-fold downward; the “mind-born” sons of the first Lord;the Shining Seven…” ( Stanza VII)