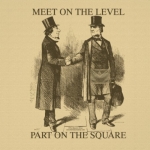 Can we communicate effectively without understanding the origin and history of our common language? The American Lexicon includes many terms that Americans utilize often without knowing where the phrase originated. The English word “lexicon” is derived from Greek words “lexis,” translated as “speech,” and “legein” translated as “to say.”

Defined as “the words used in a language or by a person or group of people,” lexicon encapsulates a multitude of words and phrases, including “Google” which most people now attribute to the sea

rch engine without realizing that the company’s name is a clever spelling of the mathematical term Googol. Coined by U.S. mathematician Edward Kasner in the late 1930s, “Googol“ is a noun meaning, “a number that is equal to 1 followed by 100 zeros.”

Freemasons are encouraged to study the Liberal Arts and Sciences: grammar, rhetoric, logic, arithmetic, geometry, music, and astronomy.  Grammar teaches us the system and structure of a language, including word meaning, punctuation, verb tense, and sentence structure. Proper understanding of the art of grammar  provides a strong foundation for studying and mastering rhetoric, or the art of persuasion.  Rhetoric can understood as the ability to communicate effectively through the establishment of common ground between speaker and listener.  Is the study of etymology an integral component in mastering the arts of grammar and rhetoric?

The study of etymology provides an enhanced ability to understand and communicate, thus improving our grammatical and rhetorical skills. By studying grammar through the lens of etymology, one begins to see patterns and gain understanding about the development of the English language.  Comprehending the history of words and phrases helps to establish rhetorical ethos allowing for appeals to the audience’s beliefs, history, morals, or ideals. Studying etymology, including a phrase’s history, original meaning, and present usage, can provide clarification of meaning that can be otherwise lost or misconstrued by the passage of time.

After September 11, 2001, the term “Ground Zero” was permanently affixed to the tragedy at the World Trade Center. Few people realize that the term was originally coined by the physicists of the Manhattan Project at the U.S. Atomic Bomb testing site in Alamogordo, New Mexico. Known under the code name Trinity, the test was the first detonation of a nuclear weapon conducted by the United States Army on July 16, 1945. The phrase, however, did not enter the American Lexicon until the U.S. bombings of Hiroshima and Nagasaki. In a June 1946 report, the phrase “Ground Zero” was used to describe the spot on the ground directly underneath the aerial detonation of the atomic bombs:  the spot in the air was called “air zero” and the spot on the ground was called “ground zero.” Following World War II, the report received tremendous attention from the press and the public. Becoming part of the lexicon, the general public used the term in reference to a nuclear bomb during the years of the Cold War.

In the latter part of 20th Century, “Ground Zero” was symbolically expanded to mean the “center of an explosion” or the site of activity where an explosion has occurred. American Language Expert, Ben Zimmer, explained that during this period the phrase,

“developed a kind of metaphorical meaning. Some people used it to mean, basically, the same thing as square one. So, back to ground zero, back to the original place.”

When the World Trade Center was bombed in 1993, the press referred to the site as “Ground Zero,” and so it was already attributed to the World Trade Towers prior to 9/11. An ABC News Correspondent, John Miller was the first person to use the term in 2001. As a former deputy police commissioner of New York City, he was on scene reporting by 1:25 p.m. that day. Interviewing police officers he stated, “these are the stories of people who were there at ground zero when the first building fell.” The phrase was repeated in the evening broadcasts on the 11th, and it quickly became part of the American Lexicon used to describe the site of bombings in New York City.

The American Lexicon: The Bikini

Popularized by the actress Annette Funicello in the 1963 film “ Beach Party,” the ladies’ swimsuit known as the “Bikini” is well known in America. Although today the Bikini is ubiquitous within American culture, many people are unaware that the bikini also derives its name from a nuclear explosion. In the 1940s, Louis Réard, a French aspiring fashion designer, entrepreneur, and mechanical engineer, no 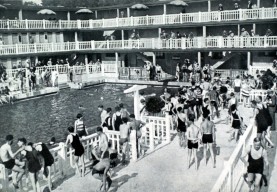 ticed that women on the beaches of St. Tropez were rolling up the edges of their swimsuits to get a better tan. Mr. Réard was inspired to design and produce a swimsuit with less fabric which exposed the wearer’s navel for the first time. His bikini consisted of four triangles made from 30 square inches of fabric.

Holding a press conference to unveil his work, Louis Réard introduced his design to the media and public on July 5, 1946, in Paris at Piscine Molitor, a public pool in Paris.  Réard named his creation the “bikini,” inspired by the explosion of an atomic bomb by the U.S. Military at the Bikini Atoll in the Pacific Ocean five days earlier. The first nuclear weapon tests since Trinity in New Mexico, the United States tested two nuclear weapons at the Bikini Atoll under the name Operation Crossroads. The purpose of the tests was to investigate the effect of nuclear weapons on warships, and Operation Crossroads was the first nuclear test to be publicly announced and attended by a live audience including a large press corps. A fleet of 95 target ships was assembled in Bikini Lagoon and hit with two detonations of Fat Man plutonium implosion-type nuclear weapons, each yielding 23 kilotons of TNT. With a large press corps in attendance, the nuclear testing at the Bikini

Réard reportedly termed his swimsuit the “bikini” because he believed its revealing style would create reactions among people similar to those created by the explosion of a nuclear bomb. His belief proved accurate as the “bikini” shocked the press and public because it was the first to reveal the woman’s navel. Less than a month after the swimsuit was unveiled to the public,  the U.S. military conducted the second atomic test of Operation Crossroads at the Bikini Atoll and named the bomb Helen of Bikini, which was detonated 90 feet underwater on July 25, 1946.

Whether the U.S. Military named the bomb in reference to  Réard’s creation is unclear. Archaeological evidence demonstrates that Greek women wore two-piece swimsuits, resembling the “bikini,” for athletic purposes, as depicted on Greek urns and paintings dating back to 1400 B.C. Regardless, the American public was shocked by the navel-revealing “bikini” and the swimsuit was not worn by the general public until the 1960s.

The American Lexicon: Meeting on the Level

Freemasonry was founded on the principal of the equality of all of mankind, symbolically illustrated by the builder’s tool of a level.  Although 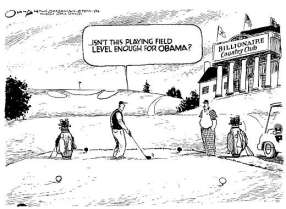 the phrase, “Meeting on the Level,” is less commonly heard in today’s vernacular, it was once a staple of the American Lexicon. Today, Americans are more likely to use the expression, “meeting on a level playing field,” which denotes a situation where neither party has an advantage over the other.

In sports where the game operates on a playing field, such as Football, one team would have an unfair advantage if the field sloped in one direction. In order to make things equal or level regardless of any defects in a playing field, it is customary in American sports for teams to swap ends of the playing field at half-time.

In American Politics, the concept of a level playing field is often referenced in Presidential speeches regarding individuals’ access to education, employment, and health-care. On September 2, 2004, Former U.S. President George W. Bush used the phrase stating, “To create jobs, we will expand trade and level the playing field to sell American goods and services across the globe.” Similarly, President Barack Obama often discusses the importance of a “level playing field.” In a speech given on January 30, 2009, he expressed, “We need to level the playing field for workers and the unions that represent their interests, because we know that you cannot have a strong middle class without a strong labor movement.”