Do We Have an Obligation to Protect the Endangered? Molecular Ecology’s Role in Saving the Greenback Cutthroat Trout

In today’s hectic world,  it is easy to turn a blind eye to concerns outside our direct purview. Our willful blindness becomes even more pervasive when it comes to issues which are unpopular or which lack a perceivable benefit to our lives. Freemasons, however, are called to stand up for what is right, just, and true. Do we have an obligation to protect the endangered?

As one of the more controversial U.S. laws, the Endangered Species Act has been derided as detrimental to progress and to the economy. When President Richard Nixon declared the need fo

r increased species conservation, Congress responded by passing the Endangered Species Act which was signed by Nixon on December 28, 1973.

The Act’s goal is to prevent the extinction of imperiled species, and to recover those populations by decreasing threats to their survival. In the forty-two years since the bill was passed, only 10 species protected under the Act have been declared extinct. Scientists estimate that at least 227 species would have likely gone extinct without the legislation. The Bald Eagle and the Grizzly Bear are two notable species that have been saved from extinction and removed from the list.

As of 2014, there were 1,261 endangered species protected by the ESA which includes Colorado’s State Fish: the Greenback Cutthroat Trout. Presumed to be extinct in 1937, a few wild populations of the trout were discovered in the basins of the South Platte and Arkansas Rivers. Following the listing of the fish under the Endangered Species Act, the scientific community launched a conservation campaign. Questions over the genetic characteristics of the elusive fish prevented the establishment of wild populations as empirical evi 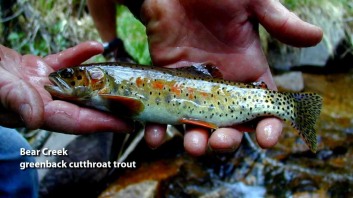 dence demonstrates that successful restoration of an endangered species requires knowledge of the species’ diversity and distribution.

The Role of Molecular Ecology

The science of Molecular Ecology provided the missing link to preventing the species’ demise. Molecular ecology applies molecular population genetics, molecular phylogenetics, and genomics to solve traditional ecological questions. Researchers at the University of Colorado analyzed the DNA extracted from wild trout and from preserved specimens collected as far back as 1857. The team first collected multiple samples of tissue and bone from the preserved trout specimens, obtaining fragments of DNA which they pieced together like a high-tech jigsaw puzzle to reveal two telltale genes of the individual specimens.  Utilizing the genetic data from museum samples, scientists were able to pinpoint the location of the last surviving wild population of the greenback cutthroat trout.

Led by Dr. Jessica Metcalf and Dr. Andrew Martin, the team was able to collect trout for repopulation efforts from  Bear Creek, a small tributary of the Arkansas River west of Colorado Springs. Since the trout were outside of their native habitat, the researchers concluded that the fish were placed there as a restocking effort. US Fish and Wildlife Service’s fisheries biologist Chris Kennedy discovered documentation that from 1889 and 1925, more than 50 million cutthroat trout from the Gunnison and White River Basins were stocked across Colorado, including in Bear Creek.

Using the Bear Creek Greenbacks, conservationists have been successful in replicating the population. Dr. Metcalf explained her success stating, “This is a real win for conservation genetics. We were able to use historical specimens to find out something quite novel about cutthroat trout biodiversity that has resulted in a management action. We are not just bringing a native species back to its historic range, but the greenback cutthroat trout, our Colorado state fish.” The aquatics team of Colorado Parks and Wildlife oversaw the raising of approximately 3,500 greenback cutthroat trout, offspring of fish taken from Bear Creek, at the Mt. Shavano State Rearing Unit and the Leadville National Fish Hatchery. “We finally have the opportunity to bring these fish home,” Biologist Doug Krieger reported about the introduction of the fish into Zimmerman Lake. On August 8, 2014, in an effort spearheaded by the greenback cutthroat recovery team, Colorado’s state fish was reintroduced to its native range.

In our modern culture is “truth” an endangered species? In America, espousing moral relativism, an unwillingness or inability to make judgments about what is right or wrong, has become an accepted norm. When ethical, moral, or social issues are debated in the public sphere, the use of rationality and logic to address such issues is often discouraged in order to foster a climate of inclusiveness. We must, however, be wary of confusing tolerance with moral ambiguity.  Freemasonry teaches individuals to living a life of high moral rectitude and to seek the truth in all situations. Whether the discussion relates to endangered wildlife, censorship, or euthanasia, an objective search for the underlying truth is often ignored to the detriment of all.