Stewards of the Earth: Improvements in California’s Drought Crisis

In 2015, the State of California faced one of the most severe droughts on record. Governor Jerry Brown had declared a drought “State of Emergency” in January of 2014 and directed state officials to take action to prepare for water shortages. However, conditions continued to deteriorate leading the Governor to order a 25 percent mandatory reduction in municipal water usage statewide. According to the Governor’s office, California’s water supplies dipped to alarming levels in 2015, indicated by depleted levels of snowpack, groundwater, water in reservoirs, and river water flows. Led by Jay Famiglietti of NASA’s Jet Propulsion Laboratory, the team of scientists utilized data from NASA’s Gravity Recovery and Climate Experiment (GRACE) satellites in an effort to better understand and adapt to

California’s drought has national significance for a number of reasons, including the fact that the state currently produces 50 percent of the nation’s fruits, vegetables and nuts. As the highest producing agricultural state in the United States, California has over 80,000 farms, which account for a large percentage of the State’s water usage.

Unfortunately, water levels in the Colorado River continued to decrease as a result of prolonged drought conditions in the West. As of April 2015, the Colorado River was flowing at 63 percent of average. In addition, the U.S. Bureau of Reclamation predicted further restrictions to the Lower Basin States due to drops in the reservoirs of Lake Mead and Lake Powell. John Entsminger, the senior deputy general manager of the Southern Nevada Water Authority,  provided this sobering analysis: “If Lake Mead goes below elevation 1,000 ( feet above sea level), we lose any capacity to pump water to serve the municipal needs of seven in 10 people in the state of Nevada.”   The U.S. Secretary of the Interior could declare a water shortage on the river, triggering a required alteration of “the Law of the River,” which began in 1922. The drought in California has implications for all Americans, especially those who live in the seven “compact” states. In order to address the growing drought concerns, Federal agencies and stakeholders have been diligently working to find innovative solutions to ensure adequate water supplies for the future.

Effective crisis management often depends on three components: encompassing data describing the problem, determined leadership, and an informed, sympathetic community. When all stakeholders have understand what the problem is and what needs to be done to correct the situation, leadership can easily motivate the general population into appropriate action. The three components are all present in California’s drought recovery. The historic drought in California saw some major improvements in the rainy season of 2o16 and millions of people experienced a slow but steady reclamation of water supply. California’s reservoirs saw significant increases in volume, and the two largest in the state, Lake Shasta and Lake Oroville, were well over 90 percent for the year. 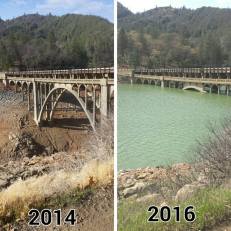 An update to the U.S. Drought Monitor was issued in April of 2016 which declared a large area of central California, from roughly Sacramento to Fresno, improved regarding the drought. More positive news followed in the fall of 2016 as October rains lifted the drought status altogether from 12 percent of the state.

Californians have demonstrated leadership in conserving water, as residential water use decreased by 28 percent compared with usage in 2013. Local water suppliers saved 1.6 million acre feet of water in the first 12 months of the conservation plan, which is enough water to supply eight million people for a year. In October 2015, 46 percent of the state was in top level drought.  A year later, California’s percentage of extreme drought was down to 21 percent.  “Californians’ continued commitment to con

The unprecedented drought across the West was a signal to Americans that what worked in the past is unsustainable in the future. For many U.S. regions, intense competition for water and diminished supplies forced local and state authorities to make tough decisions on water allocations, including implementation of unpopular restrictions. As Vicki Arroyo, the Executive Director of the Georgetown Climate Center, explained, “We’re entering uncharted territory, and yet our expertise and our systems are based on the past. ‘Stationarity’ is the notion that we can anticipate the future based on the past, and plan accordingly, and this principle governs much of our engineering, our design of critical infrastructure, city water systems, building codes, even water rights and other legal precedents.” Changes were necessary and action was required. Thankfully, technological upgrades, increased responsible water use, and improvements in state and national water policy are now reversing past water loss into water gain.

Likewise, Freemasons are called upon to be good stewards of our planet, which includes careful and responsible management of natural resources. A good steward diligently examines the needs and vulnerabilities of his or her community. In turn, this examination helps the steward plan and prepare for the future. By evaluating our current vulnerabilities, we can create strong communities, which can not only survive, but thrive.