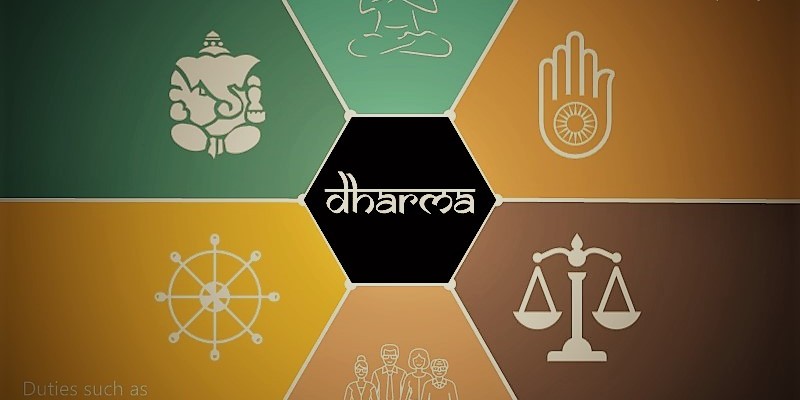 Dharma, Duty, and Freemasonry: Part I

WE all have duties, which we are responsible for in life, although some may not ascribe these responsibilities that term. We are responsible for the well-being of families and our own self-improvement. Many of us would say that we have a duty of service to our community or even to humanity as a whole. “Duty” is an important concept in Freemasonry and can be viewed or defined in two basic ways:

The first definition speaks to a higher concept – an attitude of reverence or respect in the cause of fidelity. The second definition is more concrete and delineates a specific action one is required to perform. What duties do we owe in life, and do these duties circumscribe our personal Dharma?

Dharma is an integral concept in many eastern religions, such as Hinduism, Buddhism, and Sikhism. In Hinduism, Dharma has been defined as a spiritual law, which governs the necessary conduct of each individual. While there is no direct, one-word translation in the English language, Dharma can be described as duty, morality, virtues, or calling.

Dharma signifies behaviors that are in accord with Rta, (i.e., the order that upholds the universe). In the Vedic religion, Ṛta (ऋत, “order, rule;

truth”) is the principle of natural order which regulates and coordinates the operation of the universe and everything within it. Those ordinances, or life paths, which upholds Rta, are referred to as Dharma, and the action of the individual in relation to those ordinances is referred to as Karma. Ṛta – as an ethical principle – is linked with the notion of cosmic retribution.

A central concept of the Ṛig Veda (an important Hindu Scripture) is that created beings fulfill their true natures when they follow the path set for them by the ordinances of Ṛta, and failing to follow those ordinances was thought to be responsible for the appearance of various forms of calamity and suffering. Committing one’s actions to the governance of Ṛta, referred to as its “Dharma“, was therefore understood as imperative in ensuring one’s own well-being. Karma (lit., “action”) refers to the works one performs, which can occur either in congruence with or in opposition to Dharma – and thus, to Ṛta – and which are posited to stand in a causal relationship to the pains and pleasures one experiences in life. Described also as a “law of moral causation,” Karma places the responsibility for one’s life on the shoulders of the individual. Thus, an individual’s circumstances in life – calamity or fortune – are considered the outcome of that person’s past actions.

There are aspects of Dharma that apply to everyone (universal Dharma) and aspects that are specific to each individual (personal Dharma). In order to be in accordance with Rta, one first needs to cultivate certain universal moral principles including:

Such moral principles are part of the universal application of Dharma, which apply to every individual and is referred to as sadharana Dharma. This is augmented by a person’s specific Dharma, which is impacted by three factors: 1) Gunas: Individual Tendencies, 2) Ashrams: Stages of Life, and 3) Syadharma: One’s Personal Calling.

The Gunas: Tendencies of Each Individual

“What is action; what inaction? Even the wise are hereby perplexed. It is needful to discriminate action, unlawful action, and inaction; mysterious is the path of action” – Bhagavad Gita, iv. 16-17

The concept of Gunas is based on the idea that all human beings have a mixture of three tendencies: Sattva, Rajas, and Tamas.

Gunas, or individual tendencies, are expanded upon by their application to Varnas – or groups within the Hindu social structure – based on the recognition of the difference in individual tendencies and sort all members into one of four categories. Thus, each group follows a different life path and is assigned different duties.

The Varnas: Groups Within Society

Varnas are groups within society, including Brahmins, Kshatriyas, Vaishyas, and Shudras.

These classifications were once the basis of the Caste system in India and other nations. Based on the Caste or class someone was born into, these classifications cemented the person’s opportunities and social status. This is no longer the case in India, but it does highlight the past subjection of certain people based on their circumstances at birth. This raises the interesting question: Is one’s future predetermined at birth? Are we born with certain qualities [Gunas] which influence our life path, duties, or Dharma?

This is Part I of a two part series on Dharma, Duty, and Freemasonry. Readers can view the second installment here: Part II.