This is Part II of a two part series on Dharma, Duty, and Freemasonry. Readers can view the first installment here: Part I.

“Hindu Dharma is like a boundless ocean teeming with priceless gems. The deeper you dive, the more treasures you find.”  –  Mahatma Gandhi, 1946

In the previous post of this series, I discussed the concepts of duty and dharma. Here, we continue to explore the factors in determining one’s dharma, dharma’s theological foundation, and address the Masonic connection of these themes.

The Ashrams: Stages of Life

THE next factor in determining one’s Dharma is to consider the stage of life one is currently in: Youth (Student), Adulthood (Householder), Middle Age (Transition away from Worldly focus on the material), and Old Age (Devotion and isolation). These stages are as follows: 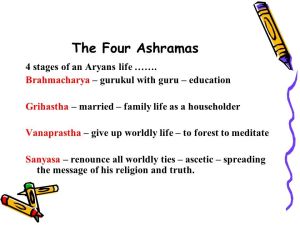 Note that individuals move through these stages on a unique basis. Some skip stages entirely, and some never reach the later stages. This is a part of one’s Svadharma or calling in life.

FOR example, Sannyasa is a form of asceticism and is represented by a state of disinterest and detachment from material life with the purpose of spending one’s life in peaceful, love-inspired, simple spiritual life. Siddhartha, or Buddha, walked away from the material life to follow the path of Sannyāsa. Similar to a Monk or Nun, individuals may take this path after Brahmacarva and skip the two intermediate stages.

This means that what is “right” action for one individual is “wrong” conduct for another.  A soldier’s duty may require the individual to kill someone, but murder is incorrect conduct for a banker or teacher.

Dharma in The Bhagavad Gita

THERE is a 2,000-year-old treatise, called the Bhagavad Gita or “Song of God”, which is considered the world’s greatest scripture on Dharma. A smaller section of the larger epic work called the Mahabharata, the seven hundred verses of the Bhagavad Gita are arranged in a conversational format between two main speakers Krishna and Arjuna.

Dharma is the first word in the Bhagavad Gita. The great work begins when the blind old king, Dhritarashtra, asks his secretary, Sanjaya, about the battle that was to take place at “the field of Dharma” (Dharma-kshetra). In the name of Dharma, Arjuna (a great warrior and general of the Pandavas) argues for nonviolence by assuming that to attack and kill so many leading men, nearly all of whom are fathers and husbands, will 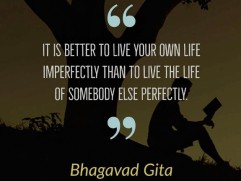 destabilize the important families and communities for which these men are responsible. The families themselves are vital to the peace and virtue of society.

Lord Krishna (God and Arjuna’s spiritual master) does not at once address Arjuna’s argument about Dharma, as we would expect in a typical debate. Rather, the Lord first reveals to Arjuna, in twenty verses (Bg. 2.11- 30) the eternal nature of the soul. Then the Lord comes back to the topic of Dharma to show that it is Arjuna who is neglecting his Dharma by refusing to fight:

“And even considering your personal Dharma as well, it is not right for you to hesitate. There is nothing better for a warrior than a fight based on Dharma.” (Bg. 2.31)

Here, we find that Dharma itself is meant to assist the real goal of life: understanding the eternal soul and its relationship with the Supreme Soul, Krishna. Lord Krishna concludes this brief reference to Dharma as one’s personal duty by saying: “Now if you do not execute this battle, then having given up your personal Dharma and reputation, you shall incur sin.” (Bg. 2.33)

Throughout the rest of the Volume, Lord Krishna speaks of Dharma in terms of His own teaching of spiritual knowledge and not directly in response to Arjuna’s argument about Dharma as ordinary religious and moral practices. Krishna’s next reference to Dharma reinforces his earlier statement that Arjuna must perform his own Dharma and not neglect it in the name of Dharma. Arjuna can neither protect Dharma nor keep himself on the spiritual platform if he abandons the duties born of his nature. Krishna explains:

Thus, the complete picture begins to emerge. An effective government must not only create laws but enforce them as well. Similarly, the Supreme Lord brings forth His law as Dharma. When obedience to His law collapses, and human beings instead propagate their own illicit “law,” the Lord descends to protect the good citizens of His kingdom, vanquish the outlaws who practice adharma, and reestablish in human society the prestige and power of His will.

We can now see why Arjuna’s initial argument – that to obey Lord Krishna and fight would go against Dharma – cannot be correct. Dharma is nothing but the Lord’s will. For Arjuna to fight, then, is true Dharma.

Thus, Lord Krishna starkly contrasts the ordinary Dharma of the Vedas with “this Dharma,” which is pure devotional service to Krishna. Krishna concludes the important ninth chapter by showing the power of this Dharma – unalloyed Krishna consciousness – to purify and save the soul. It is simply on the strength of devotion to Krishna that even a man of terrible conduct quickly becomes devoted to Dharma. So, in this manner all human beings can approach duty or Dharma in the same manner. If all individuals seek the Divine and follow the leading which springs forth, the different rules or requirements of individual Dharma become a single path.

DUTY is an important concept in Freemasonry, similar to a code of conduct by which individuals should mold their character. Moreover, members are instructed to do their duty regardless of the consequence.

Since Masonry is an institution founded on the highest virtues and principles of morality, Masonic duties are in harmony with proper conduct and the laws of their country. Some of these duties include:

To think high, to speak truth, to do well, to be tolerant to others, to search after truth, and to practice liberty under law, fraternal equality, justice, and solidarity.

Moreover, Freemasonry calls on its members to follow an individual path while also working together to uplift humanity. The Craft also inspires the cultivation of similar virtues to those considered part of the Dharma system such as patience, fortitude, and prudence. For some individuals, I posit that Freemasonry could be viewed as a major component or the culmination of that Brother’s individual dharma. What do you think?