In a recent “Today, Explained” podcast, the narrators were discussing the recent Supreme Court decisions involving arbitration and the American worker. In essence, the Supreme Court ruled in favor of a 1925 law that stated that Corporations have the right to force arbitration (Federal Arbitration Act of 1925 is the name of the law) clauses into many, if not all, types of contracts, including those that involve a contract to work. What this does is overturn a New Deal-Era law (National Labor Relations Act of 1935) that stated that employees had the right to work in concert with each other for their mutual benefit.

What does this mean? No Class-Action lawsuits for employees when wrongfully treated by their employers. For the nitty-gritty details, the podcast is recommended. In general, it means that arbitration clauses can now be put into nearly any contract and are binding. Employees who have been sexually harassed, been denied wages, or otherwise wrongfully treated during employment must now seek arbitration for grievances rather than a lawsuit. Where this has the most implication is when there are many injured in the workplace but have little ability, financially or otherwise, to stop ongoing wrongful acts.

Many people and corporations think this is a good thing; law suits are a burden on more than just the plaintiff or defendant. They are a burden on the taxpayers and the court systems – sometimes causing far more difficulties than they solve. However, taken in the context of several court decisions in recent years, it should give the people of the United States something, perhaps, to consider. This decision, by the Supreme Court, in effect provides corporations with a great deal of power and the individual, the worker, with very little.

Like Citizen’s United, this is an example of corporate legal power leveraging the judicial system of the country to produce vast corporate influence on the American political and

social landscape; in essence, corporations are circumventing the executive and legislative branches of government, and using the judicial system to create a very corporate-forward, individual-backward landscape.

People are often fond of saying that the United States is becoming an oligarchy, where government is the hands of a few people. What they are really trying to say, though, is that America has become a Corporatocracy. Economist Jeffery Sachs, in The Price of Civilization, stated that America is, in effect, a corporatocracy in which “powerful corporate interest groups dominate the policy agenda.” He gives four reasons for this being the case: 1) weak national political parties, 2) strong political representation of individual districts, 3) globalization weakening the power of employees, and 4) large corporations financing political campaigns for their own agendas.

A moment of reflection will give one enough fodder to at least question corporate influence in America. From sports arenas to libraries and entertainment centers, corporations have lent their funding, as well as views, to what we consume in America. From Citizen’s United ruling (see this well done video on the decision) to the fact that some companies are “too big to fail,” our government has come a long way from its roots of “We the People…”

Is a corporatocracy in keeping with the values of Freemasonry?

One might ask, what would our Masonic forefathers thought of the idea of Government by a small group of corporate entities? John Adams said, “Let us disappoint the men who would raise themselves upon the ruin of our country.” Yet, Benjamin Franklin is quoted as saying: “No nation was ever ruined by trade.”

Presidents over the centuries, Freemasons or not, have had something to say. U.S. President and Freemason Franklin Roosevelt stated, “No business is above Government; and Government must be empowered to deal adequately with any business that tries to rise above Government.” President Eisenhower said, “In the councils of government, we must guard against the acquisition of unwarranted influence, whether sought or unsought, by the military-industrial complex. The potential for disastrous rise of misplaced power exists and will persist.”

One might equate the “military-industrial complex” as perhaps a single, corporate power.

I see in the near future a crisis approaching that unnerves me and causes me to tremble for the safety of my country. …corporations have been enthroned and an era of corruption in high places will follow, and the money power of the country will endeavor to prolong its reign by working upon the prejudices of the people until all wealth is aggregated in a few hands and the Republic is destroyed.

Others throughout history have weighed in on the idea of corporations, from writers to inventors to even businessmen themselves.

Commerce is entitled to a complete and efficient protection in all its legal rights, but the moment it presumes to control a country, or to substitute its fluctuating expedients for the high principles of natural justice that ought to lie at the root of every political system, it should be frowned on, and rebuked.

Great corporations exist only because they are created and safeguarded by our institutions; and it is therefore our right and our duty to see that they work in harmony with those institutions.

And finally, regarding Jefferson –

Thomas Jefferson, the man who wanted an amendment to the Constitution prohibiting monopoly, would be aghast at our billion-dollar corporations. Jefferson, who abolished primogeniture and entail in Virginia in order to prevent monopoly in land, would be appalled by our high percentage of tenancy. Jefferson as the man who dreaded the day when many of our citizens might become landless, would perhaps feel our civilization was trembling on the brink of ruin, if he were to find so many of our people without either land or tools, and subject to the hire and power of distant corporations. If the Jefferson of 1820 could see his name used by men crying `States’ rights!’ in order to protect not individual liberties but corporate property, then he would shudder.

~ Henry A. Wallace, November 17, 1937, former populist U.S. Secretary of Agriculture and Vice-President of the United States.

The United States is a democratic republic, or a representative democracy, a sordid mix of Greek and Roman ideals, thrown together in some kind of weird experiment that has yet to play itself out. Yet, the overt goal in the foundation of this country was that the people themselves should have a say in the government of it – true individual representation – not the boards of directors of a few, extremely large and wealthy corporations. Corporations are not structured to be democratic nor a republic; they are in truth, oligarchies.

So, what is the United States? Is it any better or worse off than anywhere else in the world? Has the grand experiment worked to the satisfaction of our founding fathers, 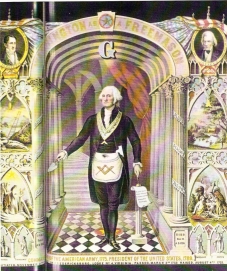 some of whom held the ideals of Freemasonry? The experiment is still very much a living organism.

Freemasonry itself is not a democracy; it is not a dictatorship, nor a republic. Each Master Mason has a vote, but not all Freemasons have a vote. Majority rules, not plurality. However, the Master of the Lodge is the voice of the Lodge, the final “say,” when it comes to matters of some Masonic jurisprudence – a sort-of dictator.

However, the Master of the Lodge does not always have the final say. He may be a tie-breaker in votes but he typically does not have a vote on general matters. But each Lodge is not an independent body; they tie back to either a Grand Lodge, Supreme Council, or other Supreme body governing the rules and regulations of their order. Each individual Lodge is represented to their Grand Lodge by a single vote made up of the votes of the Lodge. Therefore, the Lodge is a representative to the Grand Lodge for the individual, ergo a republic. If we’re not sure what the United States’ Government is, we may be just as confused as to the government of the system of Freemasonry.

Why bring all this up in a blog on philosophical debates of interest to Freemasons? This is not to stir the passions of partisanship or state that Freemasonry itself should be political. It is simply because Freemasons, especially within the United States, are inextricably linked to government. The motto of “Liberty, Equality, and Fraternity’ are on the lips of every Freemason at one time or another, whether spoken in rote repetition or with true feeling. Freemasons should ask these hard and difficult questions in order to shape the world we live in as well as the groups to which they belong. We should be unafraid to discuss the ideals of government, religion, and all aspects of life.

While it is not within the purview of Freemasonry as an institution to take a political stance, should the Freemason make his individual voice heard, in representation of what he or she feels is liberty, equality, and fraternity?

Global governance is shifting, perhaps trying to find a new way of being. It behooves us, no matter what we believe in keeping, be it a corporatocracy, oligarchy, plutocracy, theocracy, democracy, or republic, to be the voices of what the future holds. This is something that perhaps Freemasons should discuss, in educated, philosophical terms, and let the debate ensue. No one creates in a vacuum and no one creates change without speaking up. New ways of thinking evolve from educated, passionate, and respectful debate. If Freemasons are working to be leaders within humanity, these discussions should be on their tongues and not remain in the shadows of their hearts. If those who are working toward the perfecting of humanity don’t speak up, and take responsibility for shaping their nations, then who?