Freemasonry and the Way of the Warrior [Part I]

In the days of feudal Japan, from the 12th to the 16th centuries, the small island was ruled by ruthless Shoguns, warlords who controlled fiefdoms and battled one another for control of the island’s resources. They were aided in these fights by Samurai, noble warriors who were trained extensively in every martial art, from mounted archery to sword fighting, bare knuckle boxing and grappling. Knights and generals, these warriors were more than mere soldiers. Their martial prowess was dependent on their mental and spiritual discipline, discipline that was carefully cultivated over a lifetime of training.

What is a Warrior?

Throughout human history, in every society that has ever existed, there have been warriors. In the literal sense, a warrior is an individual who is actively engaged in the 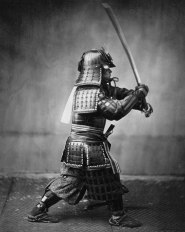 practice of warfare. More broadly however, we can think of warriors as those who are engaged in struggle. But what does it mean to be a warrior? In all interpretations of the word, a warrior is not a mere barbarian who uses brute strength to crush and dominate those weaker than himself.

The term “warrior” is used to describe an individual who has mastered their capacity for physical violence and yet abides by a code of discipline that regulates that capacity. This code of discipline is nearly always philosophical or religious in nature and governs every aspect of the warrior’s life. However, in our modern world, the necessity for familiarity with violence has diminished and along with it our need for warriors. Has that energy been lost or has it been re-directed elsewhere?

The Samurai and Bushido

The history of feudal Japan is an unending parade of warlords, known as shoguns, violently attempting to rule the fractured island. At this time, the 12th through the 18th century, Japan was not a united island but was instead divided among numerous clans, all competing for influence and control. This was the environment that gave birth to the samurai. The word “samurai” is derived from a Japanese word meaning “one who serves 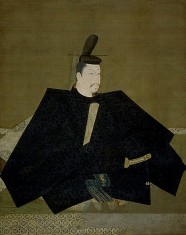 nobility” and was initially a general title for a civil servant. After Minamoto Yoritomo created the first permanent shogunate and established himself as Emperor, he codified the laws governing the samurai’s conduct.

Just as European knights of the same time period lived by a chivalric code of honor, so too did the samurai abide by a moral, ethical and philosophical creed. Known as bushido, or, the way of the warrior, this creed was heavily influenced by the emergence of Zen Buddhism into Japanese culture. Buddhism’s teachings on reincarnation and the immortality of the soul made death the focus of the samurai. A samurai was to meditate daily upon his own death, visualizing it in many forms and living through each one in his imagination so that, when the time came, he would be prepared to meet any form of death that came to him without fear or regret.

Because their teachings nullified the finality of death, the central tenet of bushido held that a samurai was to uphold his honor at all costs, including that of his life, in the performance of his duty. Duty and honor were sacred principles to the samurai, each dependent on the other. For a samurai to bring shame upon himself or his lord by failing to perform his duty with courage was an unthinkable shame that necessitated the ending of his life by his own hand, a blood atonement for his failure. The practice of seppuku – ritual suicide – is seen as barbaric by our modern culture but was the inevitable end of a disgraced samurai and was seen as the only way to reclaim his honor.

Bushido: The Way of the Warrior

Bushido, the Way of the Warrior, had 8 central tenets or virtues that were expressed by famed Japanese writer Nitobe Inazo in his book Bushido: The Soul of Japan. 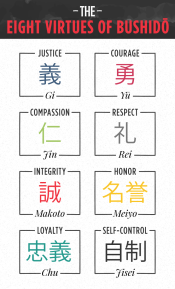 (1) Righteousness – Be acutely honest throughout your dealings with all people. Believe in justice, not from other people, but from yourself. To the true warrior, all points of view are deeply considered regarding honesty, justice and integrity. Warriors make a full commitment to their decisions.

(2) Heroic Courage – Hiding like a turtle in a shell is not living at all. A true warrior must have heroic courage. It is absolutely risky. It is living life completely, fully and wonderfully. Heroic courage is not blind. It is intelligent and strong.

(3) Compassion – Through intense training and hard work the true warrior becomes quick and strong. They are not as most people. They develop a power that must be used for good. They have compassion. They help their fellow men at every opportunity. If an opportunity does not arise, they go out of their way to find one.

(4) Respect – True warriors have no reason to be cruel. They do not need to prove their strength. Warriors are not only respected for their strength in battle, but also by their dealings with others. The true strength of a warrior becomes apparent during difficult times.

(6) Honor – Warriors have only one judge of honor and character, and this is themselves. Decisions they make and how these decisions are carried out are a reflection of whom they truly are. You cannot hide from yourself.

Miyomoto Musashi is perhaps the most legendary samurai to have ever existed. Like all legends, concrete details about his early life are difficult to verify, as we must rely on feudal Japanese sources which are incomplete as a historical record. What is known is that, at age 7, Musashi was taken from his home by an uncle and raised in a Buddhist monastery, practicing extreme physical discipline and meditation. Monasteries and

martial arts schools were indistinguishable in the days of feudal Japan as it was believed that physical conditioning and martial skill would enhance the meditative practice of the student. At the age of 13, Musashi fought his first duel to the death against a grown man and was victorious, swiftly ending the contest.

At the age of 16, Musashi participated in the Battle of Sekigahara, a pivotal battle between the forces of Western and Eastern Japan, as the country was split at the time. Musashi fought on the losing side of the battle and was severely wounded. Left for dead on the battle field, Musashi survived the ordeal. However, as his lord had been killed in the fighting, Musashi was no longer considered a samurai and instead traveled Japan as a ronin, a warrior with no allegiance to a master.

View all posts by Aksel Suvari