This is the second post of a three part series the religion of the ancient Egyptians. Part one can be read here.

There has been a long debate among Egyptologists regarding the degree to which ancient Egyptians considered the Pharaoh a god. The consensus at the moment seems to be that the ancient Egyptians viewed royal authority itself as divine. Thus, while recognizing that the Pharaoh was human and subject to human weakness, the ancient Egyptians simultaneously considered him a god, because he was the incarnation of the divine power of kingship. In this role, he acted as intermediary between the people of Egypt and the gods. He was essential to upholding Ma’at, both by maintaining justice and harmony in human society, and by sustaining the gods with temples and offerings. For these 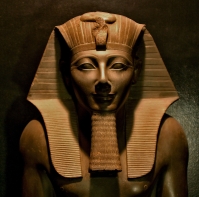 reasons, one of the Pharaoh’s jobs was to oversee all state religious activity.

The Journey of the Soul

The ancient Egyptians had intricate doctrines about death and the afterlife. They believed that humans possessed a ka, or life force, which left the body at the moment of death. In life, the ka received its sustenance from food and drink, so they believed that, to live on after death, the ka must continue to receive offerings of food, whose spiritual essence it could still absorb. Each person also had a ba, which consisted of those spiritual and personality characteristics that were unique to each individual. Unlike the ka, the ba

stayed attached to the body after death.

Egyptian funeral rituals were designed to release the ba from the body so that it could move freely, and to rejoin it with the ka so that, together, they could become the akh (meaning “magically effective one”), which they conceived of as mind as a living entity. Nevertheless, it was also important that the body of the deceased be preserved, as the ancient Egyptians believed that the ba returned to its body each night to renew itself, before emerging in the morning as part of the akh.

In early times, ancient Egyptians believed the deceased pharaoh ascended to the sky and dwelled among the stars. However, over the course of the Old Kingdom (c. 2686–2181 BC), he came to be more closely linked with the daily rebirth of the sun god Ra and with the underworld ruler Osiris, as those deities grew more important.

By the time the New Kingdom rolled around, ancient Egyptians believed that the ka and the ba had to escape an assortment of supernatural perils in the Duat (the realm of the dead), before submitting to a final judgment, known as the “Weighing of the Heart,”

carried out by Osiris and the Assessors of Ma’at.

This judgment consisted of, the gods comparing the actions of the deceased while alive (symbolized by the heart) to Ma’at, to determine whether he or she had behaved in accordance with the principles of Ma’at. If the deceased was judged worthy, his or her ka and ba were united into an akh. There were several coexisting beliefs about the destination of the akh. Frequently, the worthy dead were said to dwell in the realm of Osiris, a lush and pleasing land in the underworld. The solar vision of the afterlife, in which the deceased akh traveled with Ra on his daily journey, was still associated with royalty, for the most part, but could be extended to others as well. Over the course of the Middle and New Kingdoms, the notion that the akh could also visit the world of the living, and magically affect events there to a certain degree, became increasingly widespread.

Myth of Osiris, Isis, and Horus

The most important of all ancient Egyptian myths was the story of Osiris and Isis. It is the tale of the divine ruler Osiris, who was murdered by his jealous brother, Set, a god often identified with the forces of chaos. Osiris’ sister and wife, Isis, resurrected him so that

they could conceive an heir: Horus. Osiris then entered the underworld and became the ruler of the dead.

After he grew up, Horus fought and defeated Set to become king himself. The association of Set with chaos, and the identification of Osiris and Horus as the rightful divine rulers, provided a rationale for the succession of Pharaohs and set up the Pharaohs as the upholders of order. At the same time, the death and subsequent rebirth of Osiris was connected to the Egyptian agricultural cycle, in which crops grew in the wake of the flooding of the Nile, and also provided a template for the resurrection of the human ka and ba after death.

Another important motif in ancient Egyptian myth was the journey of Ra through the Duat each night. During the course of this journey, Ra would meet with Osiris, who served as an agent of regeneration, so that his life was renewed. Ra would also battle each night with Apep – a serpentine god that represented chaos. The defeat of Apep and the meeting with Osiris would ensure the rising of the sun the next morning, a daily event that symbolized rebirth and the victory of order over chaos.

Among the most notable and thoroughly preserved Egyptian writings are funerary texts designed to ensure that the deceased made it to a pleasant afterlife. The earliest of these are the Pyramid Texts. They are a loose collection of hundreds of spells, inscribed on the walls of royal pyramids during the Old Kingdom, which were intended to magically provide pharaohs with the methods by which they could take their place in the company of the gods in the afterlife. The spells appear in differing arrangements and combinations, and a handful of them appear in all of the pyramids.

At the end of the Old Kingdom a new group of funerary spells, which included material from the Pyramid Texts, began to appear in tombs, but these were primarily inscribed on coffins. This collection of writings, known as the Coffin Texts, was not reserved for royalty, but turned up in the tombs of non-royal officials. In the New Kingdom, various new funerary texts emerged, of which the most well known is the Book of the Dead. Unlike the earlier texts, it frequently features extensive illustrations, or little scenes. The Book of the Dead was copied on papyrus and sold to the common people to be placed in their tombs.

The Coffin Texts included sections with detailed descriptions of the underworld, along with instructions on how to overcome its dangers. In the New Kingdom, this material inspired a number of “books of the underworld,” including the Book of Gates, the Book of Caverns, and the Amduat. Unlike the previous loose collections of spells, these underworld books are organized portrayals of Ra’s passage through the Duat, and through metaphor, the journey of the deceased’s ka and ba through the realm of the dead. These texts were originally restricted to the tombs of pharaohs, but in the Third Intermediate Period (1069–744 BCE) their use was widespread.