The use of the word ‘race’ began about 1560, in Middle French, from the root word for “generation.” It comes from an older Italian word, razza, which, might be speculated, came from ratio, which originally meant idea or “conception of something.” The word does not have certain origin, but it certainly has certain meaning in our modern world.

Early American colonists struggled with race as much as we do today. With a radically different foundation of daily life, religion served as the basis for racial divide.

‘Race’ originally denoted a lineage, such as a noble family or a domesticated breed, and concerns over purity of blood persisted as 18th-century Europeans applied the term —which dodged the controversial issue of whether different human groups constituted “varieties” or “species” — to describe a roughly continental distribution of peoples. Drawing upon the frameworks of scripture, natural and moral philosophy, and natural history, scholars endlessly debated whether different races shared a common ancestry, whether traits were fixed or susceptible to environmentally produced change, and whether languages or the body provided the best means to trace descent. Racial theorization boomed in the U.S. early republic, as some citizens found dispossession and slavery incompatible with natural-rights ideals, while others reconciled any potential contradictions through assurances that “race” was rooted in nature.

— Oxford Encyclopedia, The Idea of Race in Early America

While founding fathers could not get over this hurdle of the nature of “race,” the entire nation has trudged onward trying in several corners to face it, with very little success.

From Jim Crow laws stating “separate but equal” to the civil rights movement of the 60’s onward, people of all colors and backgrounds have struggled to be treated like human beings. Simply human beings. In the early 2000’s, racism, the idea of separation of peoples, is alive and well.

“What has changed since the collapse of Jim Crow has less to do with the basic structure of our society than with the language we use to justify it. In the era of colorblindness, it is no longer socially permissible to use race, explicitly, as a justification for discrimination, exclusion, and social contempt. So we don’t. Rather than rely on race, we use our criminal justice system to label people of color “criminals” and then engage in all the practices we supposedly left behind.”

While the U.S.A. might have had an African-American President, we were quickly followed by this:

Well, then, let’s bring the subject out for discussion into the light of day.

There are many people who would argue that they are not racist. I disagree. Everyone is racist to some point or another; whether it be national pride, cultural or heritage pride, seeing yourself as a separate from another human being in any way is racism. We all have, in our heads, the idea of “other,” whether it is gender, cultural, language, sexuality, skin color, or what have you. Human beings separate themselves in order to find security. Surely someone who is “not other” will protect and care for us, keep the tribe safe. We look for security in our chaotic world and in a sea of humanity, we cling to what we know.

Even Freemasonry has been subject to racism, and continues to be so. In 2009, the racism of some Georgia Masons was brought to light in Masonic and Civil courts. The rituals and foundations of Freemasonry are not racist; in fact, its precepts are strictly very non-discriminatory. Several Freemasonry orders admit people of all genders, races, creeds, and religions, including atheists. Yet, grand ideals and all, like any institution it too can be subject to human bias.

The question is, “what do you do with this sense of ‘other?'”Are we even aware that we have a sense of “other?” We all have preconceptions of traits, habits, or mores of certain peoples that are not of our own “tribe.” We have ideas and thoughts about other human beings from different places, different regions of the world. To say we don’t shows an ignorance of our own upbringing. My parents were not openly racist but my grandparents were – and they were active Freemasons. How could those traits have not been passed down to my parents? How could they not have been passed down to me, consciously or not? You don’t get all the good and none of the bad.

I would state this unequivocally: it’s our responsibility as decent human beings to treat everyone fairly, equitably, and justly, regardless of what is in our thoughts. Perhaps despite our thoughts. 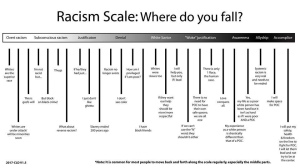 It is the actions of people which determine their active racism. A middle-aged couple walk on the other side of the street to avoid a group of young African-American men walking towards them. A white man sitting on the bus who ignores an aged Hispanic woman who is standing and holding heavy grocery bags, yet offers his seat to a well-dressed white woman. People who blatantly ignore a group of Asian families waiting to get onto a train and push right past them.

We see these acts all the time, sometimes several moments in a day are filled with them. Maybe we do them. These could be the acts of people who are just horrible human beings, treating other human beings with contempt. They could be the acts of the completely ignorant. They could be racist acts. Only the human being committing them knows. Consciousness requires a lot of self-reflection. If the perpetrator isn’t clear about how they move through their day, they will continue to effect human beings with racist, demeaning, or fearful actions. Fear, the great motivator, is rooted in ignorance.

For those that think they are not racist, or that we don’t live in a racist society in most of the world, one would ask why these acts still happen? Racists and decent human beings come in all shapes, sizes, and colors. They come from all religions, all creeds, all countries. They are educated and uneducated; they are Presidents; they are businessmen, farmers, doctors, and Wal-Mart employees. We are surrounded by decent and indecent people. And yet, these acts still happen. Do decent people stand up and say something?

It seems like it might require the sound of voices to rise up when these acts of ignorance are being committed. It takes courage to overcome ignorance. It may be our own education that needs to be rounded out. It may be spending time with “another” to get a sense of what it’s like to walk a mile in their shoes. To say that one should be “colorblind” is ignorant and unnecessary. We should not be colorblind; we should be aware, conscious, and active in our support that all human beings are the same, regardless of any thing that took place before we met them, regardless of who their parents were, what gender they were born with or are now, and regardless in whom they place their trust, their destiny, or their faith. We need to stop being afraid. Tolerance is not homogeneity; acceptance does not mean giving up identity. There is nothing superior about acting so.

Only one sort of racism should be tolerated: the human kind. However, our cats may have something to say about that.

“Nothing in all the world is more dangerous than sincere ignorance and conscientious stupidity.”