The Key of Solomon

Many people have heard of the Key of Solomon, and indeed, Dan Brown’s book The Lost Symbol emphasized some of its mysterious ideas and brought them to the fore of modern culture. The Key of Solomon is ostensibly a text of “revealed” secret information given to King Solomon, son of David (Israel), and written by Solomon, to help others gain deeper knowledge of the mysteries of the universe.

The text is now thought to be a 14th or 15th Century Latin “grimoire” of Renaissance “magic” couched in Judeo-Christian terminology and mythos. This symbolic substitution was a common method of many alchemists and “magicians” in an age of the Catholic Inquisition and heresy trials. The majority of manuscripts of The Key of Solomon have overt references to alchemy, kabbalah, and hearken back to what many would see as the ancient mystery schools (e.g. Pythagoras, Orpheus, and Eleusis) of Greece and Rome. Most remaining manuscripts of this Key of Solomon date from the 16th to 18th Centuries, many of which can be found online in PDF form (sacred-texts.com) or orderable from 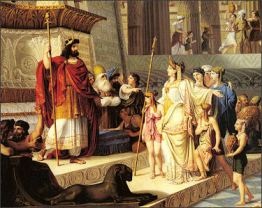 Amazon or Kessinger’s. You can download an 1888 translation by S.L. MacGregor Mathers here.

The Key of Solomon contains neither a key nor Solomon within it; while the book may have some overtones of unlocking “esoteric” information in the forms of diagrams, the key specifically refers to what it unlocks. In other words, the title Key of Solomon” would translate to the 14th C. alchemist as “that which unlocks what Solomon does/is.” The document was written long after Solomon died, and this might be evidenced in the fact that some of the references do contain links to Jesus. In at least one transition, “Jesus Christ” is mentioned; this is an obvious anachronism to Solomon the King. Why Solomon?

Solomon is found across all of the Judeo-Christian-Muslim religious texts in the form of a wise, wealthy, and learned man. He’s noted as being a prophet, astronomer, poet, builder, architect, and businessman. Biblically, he is attributed to building many temples in his life to a variety of deities, not just Yahweh. Again, I believe we have Solomon as a symbol and not as a ruler in Israel. He’s the symbol of the learned man, striving for knowledge of the seen and the unseen. In this quest for knowledge, the human being will find the success that Solomon had found. Whatever historical or factual information may or may not be found about King Solomon, he has become the ideal of the powerful and wealthy monarch that is wise, intelligent, and devoted. It necessarily follows that the “key of Solomon” would be the guide or guides to unlocking the wisdom, knowledge, and riches of all earthly, and thus natural, matters.

This latter part appears important. If we understand that these original Key of Solomon texts may have been written by both Islamic alchemists and Judaic kabbalists, we can take the meaning of the title Key of Solomon to be as ascribed above: the key to unlocking super-human abilities, especially the ability to manipulate nature. In the Qu’an, Solomon asked for, and received, from God many of these abilities, such as the ability to speak with birds, control of air (wind) and fire (Djinn), and thus the elements.

And to Solomon (We made) the wind (obedient): its early morning (stride) was a month’s (journey), and its evening (stride) was a month’s (journey); and We made a font of molten brass to flow for him; and there were Jinns that worked in front of him, by the leave of his Lord, and if any of them turned aside from Our command, We made him taste of the Penalty of the Blazing Fire.” (34: 12) and “At length, when they came to a (lowly) valley of ants, one of the ants said: “O ye ants, get into your habitations, lest Solomon and his hosts crush you (under foot) without knowing it.” – So he smiled, amused at her speech; and he said: “O my Rabb (Arabic: رَبّ‎‎, Lord)! So order me that I may be grateful for Thy favors, which Thou hast bestowed on me and on my parents, and that I may work the righteousness that will please Thee: and admit me, by Thy Grace, to the ranks of Thy righteous Servants.” (27: 18–19)

One might believe that Solomon was the first, or at least the most famous, alchemist, no? Perhaps.

Several versions, transitions of the manuscripts of various Keys of Solomon, were picked up by the occult movement of the late 19th and early 20th Century, when many of the most recent versions were translated and/or compiled. Waite wrote two editions of his book The Book of Ceremonial Magic (formerly The Book of Black Magic and Pacts)  in 1913, both of which draw heavily on these several Key of Solomon manuscripts. While not a direct correlation, it seems as if the Key of Solomon received a “black magic” reputation from this association, and perhaps fueled some of the aggression toward Freemasonry. One only needs to do a Google search on “Key of Solomon Freemasonry” to see various works on the black, and backwards, associations.

Why would this be? The Key of Solomon is typically associated with the Holy Royal Arch degree, as evidenced by its jewel. A lovey description and write up of the jewel can be found here. For anyone who has seen the jewel, its likeness to any of the seals or glyphs contained in the book Key of Solomon is similar. While it may be a more modern, stylized version of the one of these glyphs, it’s clear that the idea represented is an unlocking of “wisdom” for those who have “ears to hear.”

The idea of anything dark associated with this degree is rubbish; and yet, for the same reasons our medieval ancestors hid the knowledge of alchemy within a Judeo-Christian mythic book, perhaps Freemasons, in developing this degree, felt the same way. The 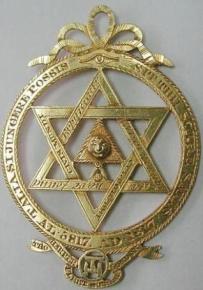 legends and teachings within Freemasonry have been housed in the same myths of Judeo-Christian-Islamic literature, and it’s no surprise that this figure of Solomon would connect to the conscious and unconscious psyche of the majority of the Western world. Freemasonry is a Western invention.

Additionally, there is a fascination in these tenuous connections from ancient to more modern authors; reading original texts, one hopes to unlock a different way of approaching the problems of life and death, and thus perhaps gain some “secret” knowledge. Like all things esoteric (and Freemasonic), the key to unlocking the secrets lies within the seeker, not in some random jewel on the breast of someone who has taken a degree. As with alchemy, kabbalah, and any mystery school, the seeker must work his mind to gain the insight. These texts, symbols, and mysteries appeals to our sense of power, to the secret knowledge that perhaps we alone can find. To what ends we apply these tools, for the benefit of ourselves or the benefit of humanity, is solely within our sphere of control.